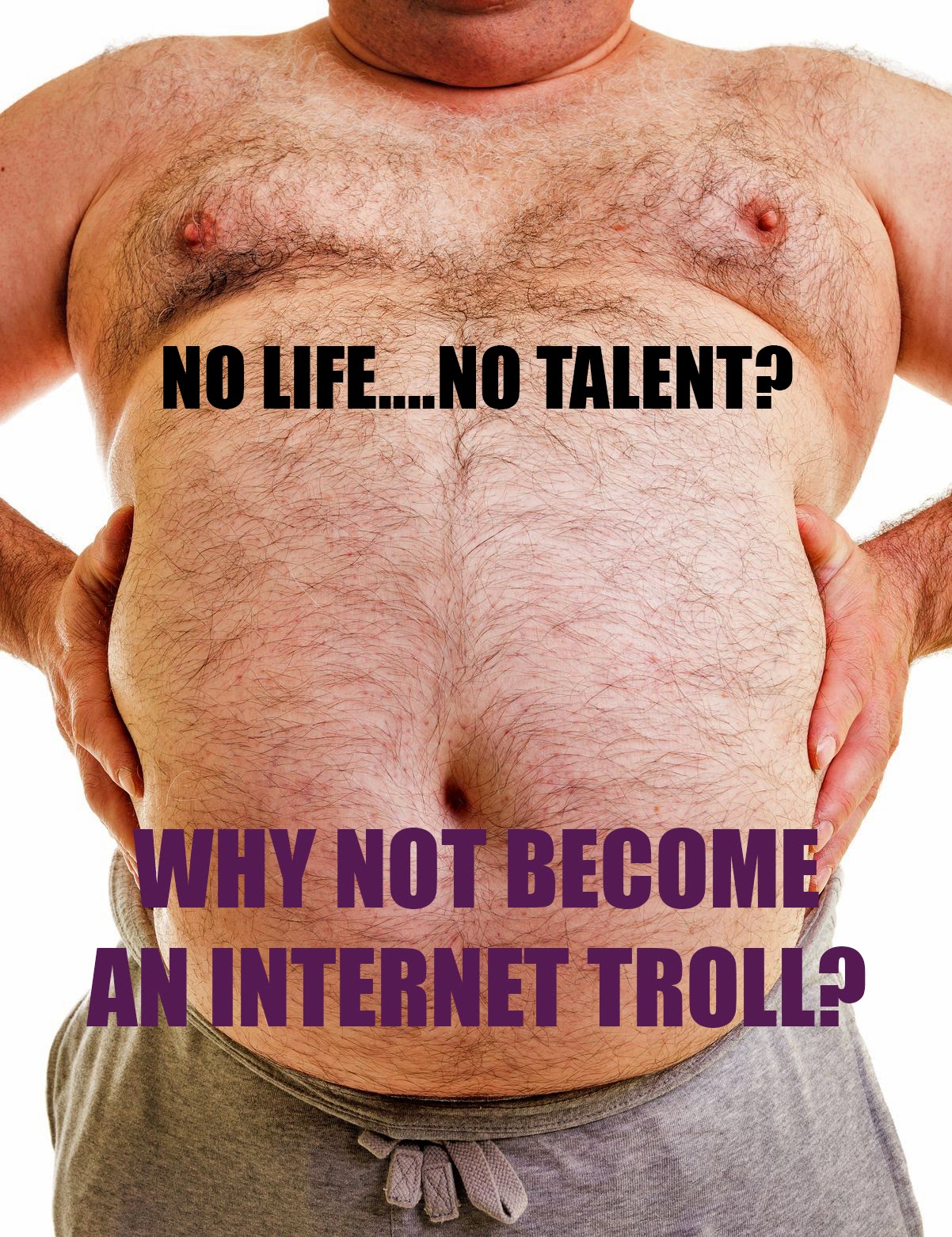 According to a new study, researchers have found that people who troll online often have nasty personalities. And, well, they like doing it. Trolls enjoy trolling.

What Is A Troll?
The term derives from "trolling", a style of fishing which involves trailing bait through a likely spot hoping for a response. The psychological pathology of trolls often includes feelings of self loathing and worthlessness that usually stems from mental abusive from family members, usually from a parent.  Trolls tend to be sad people, living their lonely lives vicariously through those they see as strong and successful. Surprised? Not sure anyone would be.

Nonetheless, the researchers found that trolls scored highly on a number of personality traits examined: Poor self esteem, feelings of worthlessness, psychopathy, narcissism,  disagreeableness and sadism. Internet trolls invariably suffer from bouts of depression, obsessive compulsive disorders and often borderline personality disorders. It is not unusual to also have suicidal thoughts.

Trolling is, according to the researchers (Buckels et al., 2014), the “practice of behaving in a deceptive, destructive, or disruptive manner in a social setting on the internet with no apparent instrumental purpose.” People who troll like to post comments to websites or communities online that cause trouble, insult others, and cause general mayhem, and often publish false information and statements which gives the troll the illusion of power.  Trolls often stalk others on the internet
which allows them to think they are strong, too. For trolls, any response is 'recognition'; they are unable to distinguish between irritation and admiration; their ego grows directly in proportion regardless of the accuracy of content that they post. They often possess an illusion that they have been appointed some imaginary role of "righting a perceived injustice" imposed upon them. Trolls often latch onto events that may have occurred many years ago and are unable to distinguish the passage of time, which often leads to delusional behaviors.

The researchers coined their own term for four of the personality variables they studied, which they call the Dark Tetrad of personality: Machiavellianism, psychopathy, narcissism, and sadism. Machiavellianism is a willingness to manipulate and deceive others, while psychopathy is not having any remorse or empathy for others. The researchers thought everyday sadism would be most conducive to trolling behavior online.

In two studies of over 1,215 participants, the researchers found that a number of personality traits were associated with a greater likelihood for trolling.

In the first study of 418 Mechanical Turk workers, the researchers found 5.6 percent of survey respondents enjoyed trolling. They scored significantly higher on traits of Machiavellianism, psychopathy, narcissism, extraversion and sadism. They also scored lower on agreeableness (meaning they were, from a personality standpoint, more disagreeable).

In the second study, the researchers found that both sadism and Machiavellianism were the best predictors of enjoyment of trolling behavior online. Most of those participants came from the Amazon Mechanical Turk service, where participants were paid $0.50 for their participation in taking all of the surveys the researchers administered.1


In the final analysis of Study 2, we found clear evidence that sadists tend to troll because they enjoy it. When controlling for enjoyment, sadism’s impact on trolling was cut nearly in half; and the indirect effect of sadism through enjoyment was substantial, [and] significant [...].

Problems with the study? Strangely, the researchers mentioned no limitations of their study. Other than the use of their own measures (which were listed as “in press” in the study), the researchers apparently never defined “trolling” to the participants in the study. It could mean different things to different people. And of course, the participants were either largely Mechanical Turk workers or Canadian college students. These results may not generalize to the population.
It’s good to know that trolls online have a personality type that fits with what most of us view them as being — sadistic, deceptive and in it for themselves. Trolls just want to have fun? Sure… but who has the time?


Troll - Angler or Underbridge Dweller? (Traits of an internet troll)

No Imagination - Most are frighteningly obvious in publishing "over the top" statements. Trolls will fabricate stories that serve their own delusions without any concern for facts or reality.
Pedantic in the Extreme - Many trolls' preparation is so thorough, that while they waste time, they appear so ludicrous from the start that they attempt to elicit sympathy - usually generated by the troll as anonymous posts on blogs.
Crossposting - Any post that is crossposted and repeated on numerous platform should be viewed as suspicious activity of a troll,  particularly if the information is repeated verbatim. Why would someone do that?
Missing The Point - Trolls rarely serve any genuine purpose in their writings - they cannot, if asked  justify their twaddle - so they establish a pattern of missing any coherent point.
Thick or Sad - Trolls are usually sad, lonely folk, with few social skills; they rarely make what most people would consider intelligent conversation. However, they frequently have an obsession with their IQ and feel the need to tell everyone. This is so frequent, that it is diagnostic!

Somewhere on the web there must be an Intelligence Test for Trolls - rigged to always say "above 150"
Posted by Richard Zampella at 11:48 PM

Email ThisBlogThis!Share to TwitterShare to FacebookShare to Pinterest
Labels: Cyber stalking, Get a life, internet stalkers, internet trolls, Jealousy, pathology of a troll