An Ode to Tennessee Williams on his Birthday 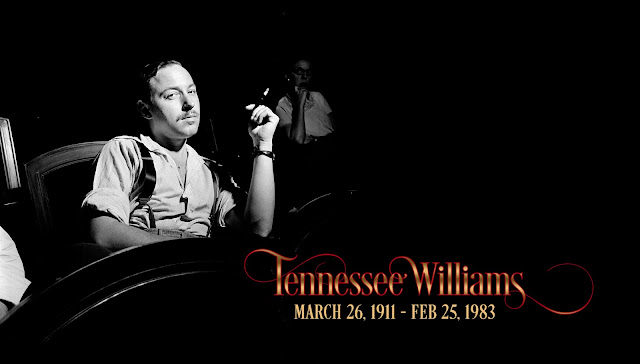 Most people have never seen a live performance of a Tennessee Williams play, but you will certainly recognize his words. Lines from his works have become have become part of the lexicon of our language in which his vocabulary is inseparable from his writings — and the kinds of characters who speak them. 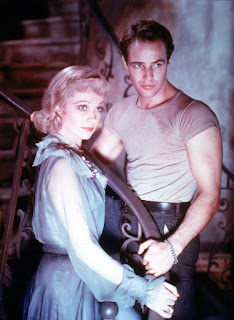 "Whoever you are, I have always depended on the kindness of strangers." — Blanche Dubois, in A Streetcar Named Desire.

"Stella! ... Stella!" — a shattered  Stanley Kowalski, filled with liquor and guilt, calling to his wife from the darkened streets of New Orleans in the same play.

Blanche is Stanley's sister-in-law, a faded Southern belle that is both fixated and repulsed by the brute.

"He's like an animal, has an animal's habits," she tells Stella. "There's even something subhuman about him. Thousands of years have passed him right by and there he is — Stanley Kowalski, survivor of the Stone Age, bearing the raw meat home from the kill in the jungle. And you, you here waiting for him. Maybe he'll strike you, or maybe he'll grunt and kiss you. That's if kisses have been discovered yet."

The observer of humankind who crafted those words, Thomas Lanier Williams, was born 105 years ago — on March 26, 1911 — in the Mississippi Delta town of Columbus. In a career that spanned half a century, he redefined what a play could do. He created some of the most remarkable characters in world drama in his more than 70 plays, including Cat on a Hot Tin Roof, Sweet Bird of Youth, The Rose Tattoo and The Night of the Iguana. He also wrote two novels, several collections of poetry and stories, and adapted many of his plays to the screen.

He changed the history of American drama and drama in the English-speaking world with his first two plays because they were so different, He broke free of what had been going on in the 1920s and the 1930s — all those social-protest dramas — and gave us something totally new, this wonderful understanding of human nature, human suffering ... human foibles.

With both The Glass Menagerie and Summer and Smoke, the first two of Williams' plays to be produced in New York and it was in New York that the playwright made his first big impression. The Glass Menagerie enjoyed a successful Broadway run and won the New York Drama Critics' Circle Award for best play of 1945. He fell in with a circle of actors, writers and directors that included Marlon Brando (whose career was launched by his portrayal of Stanley Kowalski in the stage version — and later the film — of Streetcar), and Eli Wallach.

Wallach spent the first five years of his career acting in Williams plays. He originated the character Kilroy in 1953's Camino Real. He won a Tony for creating the role of the truck driver, Mangiacavallo, in 1951's The Rose Tattoo. But he says his favorite remains The Glass Menagerie.

"What a play," he says, a bit of awe in his voice. "You take a family and you wring it around. ... Audiences were startled by this man's ability to do that."

Williams' ability to express his guilt and anguish in his work won him many honors. He received two Tony Awards, two Pulitzer Prizes — for A Streetcar Named Desire and Cat on a Hot Tin Roof — and four New York Drama Critics Circle Awards.

And though age and alcohol had begun to catch up with Williams by the mid-1960s, he continued to write — every day, from six in the morning until noon.

The writings of Tennessee Williams teaches us an important lesson. "He said of his sister when somebody inquired about how she was doing in the nursing home ... he said, 'She's surviving with grace.' And I think he, in so many ways, taught us how to do that”.

Tennessee Williams died in a New York hotel room in 1983 at the age of 71.
He's buried in St. Louis — where he grew up — alongside his sister Rose.
Posted by Richard Zampella at 9:18 PM No comments:

Posted by Richard Zampella at 8:18 PM No comments: