Dr Arthur Zampella: Youngest Editor of “The Columbia Review” in the History of Columbia University 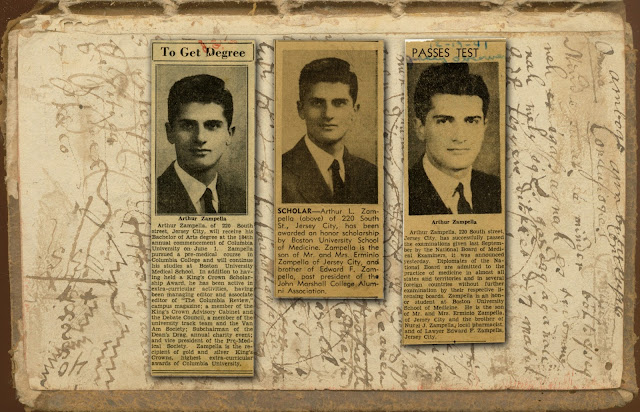 Arthur Zampella received his Bachelor of Arts degree from Columbia University on June 1, 1938. He was admitted to the school at the age of sixteen. Zampella pursued a pre-med course in Columbia College. In addition to having held a King’s Crown Scholarship Award, he was also active in extra-curricular activities having been the youngest managing editor & associate editor of “The Columbia Review” in the entire history of the university.

While at Columbia, Zampella was a member of the King’s Crown Advisory Cabinet and the Debate Council, a member of the university track team and the Van Am Society; Subchairman of the Dean’s Drag, annual charity event; and vice president of the Pre-Medical Society. Zampella was the recipient of gold & silver King’s Crowns, the highest extra-curricular awards of Columbia University.

While attending the Boston University School of Medicine, he was awarded an honor scholarship and upon graduation, successfully passed all examinations by the National Board of Medical Examiners which allowed him to practice in all states and territories as well as numerous foreign countries. He enlisted in the United States Navy in 1941, serving as a medical officer in the Pacific during World War II.
Posted by Richard Zampella at 11:53 PM No comments:

Majestically standing on Union Valley Road since the day she opened her doors to the public in 1903, Idylease remains one of Newfoundland's most beautiful and impressive structures.

For over 25 years Richard Zampella has envisioned an opportunity to celebrate the history and future of the land that he grew up on in Newfoundland, NJ. Consistent with the wishes of his late father, Dr. Arthur Zampella, the property along with it’s historic structure is finally under the stewardship of his son Richard

I hope you enjoy this tribute to this historic landmark and to my father, Arthur Zampella, M.D.

This footage was filmed over the course of several days over the skies of Idylease. Photographed and Edited by filmmaker Richard Zampella -- The video makes use of a DJI Phantom Drone with a Zenmuse 3-D Gimbal and the GoPro HERO 4 Camera.

For more info about Idylease, visit: http://www.idylease.org
Posted by Richard Zampella at 2:07 AM No comments: