Official Trailer for Inside High Noon for Public Television: Narrated by Matthew Rhys

Inside High Noon is the second documentary this year that I produced and edited for American Public Television. It will premiere this fall on all major Public Television Stations around the country. I dug deep this past summer to incorporate into the documentary, the themes and messages that are universal to us all. I have many people within my inner circle to thank. They know who they are and they know their contributions. Most of all to John Mulholland who wrote and directed the documentary. The 1952 movie High Noon is John’s favorite film. I hope that my contribution has done justice to his vision and his love of this masterpiece of American Cinema. He was with me every step of the way. Always available and lending his ear by patiently listening to my thought process. Thanks to #MatthewRhys who took time from his busy schedule to record his narration in London. Thanks to Carl Foreman who wrote the original screenplay of High Noon. He left us a roadmap to dissect the multi-faceted themes which are explored in the documentary. What occurred over the course of the original production were crazy times indeed. This film represents some of my best work to date. Check local listings on your local Public Television stations for times and air dates near you. #PBS
Posted by Richard Zampella at 6:16 PM No comments:

A documentary about renowned author Elmore Leonard, But Don’t Try to Write, will be airing first on July 7th at 2 p.m. on public television in the cities across the United States. The documentary was written and directed by John Mulholland and Produced and Edited by Richard Zampella.

But Don’t Try to Write explores the author’s legacy and his influence on generations of writers and will be narrated by Campbell Scott. It will first premiere on July 7th, 2022 at 2 p.m. in cities like Memphis, Jackson, Columbus-Tupelo, Biloxi-Gulfport, Meridian, and Greenwood-Greenville. At 9 p.m. the documentary will premiere in San Francisco and Monterey-Salinas. In the days following the initial premiers, the film will be broadcasted across the country in cities like Cleveland, Portland, Bend, Tucson, Eugene, Meridian, and Youngstown. But Don’t Try to Write is a produced by Richard Zampella and Shannon Mulholland, executive produced by Craig Gilbert, a production of Dutch Films, LLC and distributed by American Public Television (APT).

The film features interviews with Jim Born, Mike Lupica, Wendy Calhoun, Neely Tucker, Graham Yost, and many others. Through these conversations, the film paints a portrait of an artist who has profoundly impacted our culture and our language. It also includes 30 minutes of original, unreleased interview footage with Elmore Leonard.

Posted by Richard Zampella at 11:44 AM No comments:

The 2021 Holiday Season at Idylease 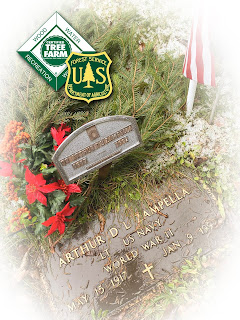 My dad was proud that in 1991 his tree farm at Idylease was selected as the Outstanding Tree Farm of the Year by the US Dept. of Agriculture and the State of New Jersey. He was attuned to the environment his entire life and saw the tree farm at Idylease as his contribution to preservation efforts. On this Christmas Day, his gravesite is adorned with a grave blanket made of branches from the trees he loved so. Merry Christmas Dad. Thank you to Andy Bennett at Ridge & Valley Forest Management for helping me maintain the 100 acre forest for generations to come.
Posted by Richard Zampella at 1:06 PM No comments:


There was a bond my father had with Ernest Hemingway. Hemingway had re-shaped the definition of masculinity of American males in the 1940s and 1950s. A large segment of these men fashioned themselves after Hemingway, taking their cues from his sense of adventurism.

Dr. Arthur Zampella was not immune from the influences of Hemingway's works as a writer. So much was that influence, that he purchased the sister ship of La Bella Lola that was built for Hemingway in the Cayman Islands in 1947.

In 1948, may dad took the schooner on a Hemingway inspired deep sea fishing trip and landed a 12 foot sailfish off the coast of Venezuela. That fish hangs on the wall of the indoor pool at Idylease to this very day: A relic connected to Ernest Hemingway hanging on walls of Idylease. How cool is that?

The boat was moored in the Long Island Sound for many years before it tore loose in a hurricane and ended up on the rocks at Atlantic Highlands in New Jersey. The vessel was unable to be salvaged. A sad ending to a vibrant period of my dads life.

At my dads funeral in 1992, his best friend Andy Bertone, laughed about a drunken night in the 50s when they attempted to board the schooner and impress their dates with a stolen row boat. They all gave up because they simply couldn't find the boat in the pitch dark.

Little would my father know that many years later, the connection with Hemingway would culminate with a documentary I produced on Ernest Hemingway with John Mulholland and his daughter Shannon. The film received a Critics Pic from the New York Times in 2013. Post production work was completed at Idylease, with my father being a constant inspiration to tell the story. Patrick Hemingway; Ernest's last surviving son, was fascinated by the connection between these two men when discussing it over dinner at the Yale Club a few years ago.

Posted by Richard Zampella at 3:44 PM No comments:

Idylease Guests of the 20th Century

THOMAS EDISON
Thomas Edison’s most noteworthy contribution to the Franklin-Ogdensburg mining district was to serve as a innovator in mining and milling methods, including new techniques in blasting, conveying, crushing, and magnetic separation. His renowned electrical and telephone systems were employed in Franklin and Ogdensburg at an early time.
F. Fichter Hoagan, the facilities manager at Idyleaase for Dr. Daniel Drake often reminisced of the days when Edison would spend the evening at Idylease while working on a magnetic ore extracting device at the Franklin/Ogdensberg Mine. Newfoundland served as the half-way point between Edison’s lab in West Orange, NJ and he would stop to have his car serviced at a garage in Newfoundland. He would spend the night at Idylease before proceeding on to the Franklin mines. Edison was no stranger to Newfoundland. He had filmed scenes from “The Great Train Robbery” in Echo Lake.
CONGRESSWOMAN MARY T. NORTON
Mary Teresa Norton (March 7, 1875 – August 2, 1959) was an American politician. The sixth woman in the United States Congress, she was the first from an Eastern state (New Jersey), and the first non-Republican (she was a Democrat). She went on to serve an unprecedented 13 consecutive terms in the United States House of Representatives, from 1925 to 1951, and chaired four committees. She was a labor advocate and a supporter of women’s rights. During the late 1920’s Ms.Norton was a regular guest at Idylease.
HORATIO COLLINS KING
American Civil War Medal of Honor Recipient: Guest at Idylease in 1913 – Horatio Collins King (December 22, 1837 – November 15, 1918) was a Union Army soldier who received the Medal of Honor for his actions during the American Civil War. He also served as a U.S. lawyer, politician and author and was admitted to the bar in New York City in 1861. He served in the armies of the Potomac and Shenandoah during the Civil War from August 1862 until May 1865, when he resigned with the rank of brevet colonel. King earned the Medal of Honor for service near Dinwiddie Courthouse, Virginia, on March 31, 1865. King was the son of the Postmaster General of the United States under President James Buchanan.
WILLIAM B. HANNA
Although familiar with virtually all games in the realm of sports, William B. Hanna (1862–1930) specialized in sports writing in baseball and football. He was brought up in Kansas City and began his newspaper career with the Kansas “Star” but came to New York in 1888, joining the staff of the New York, “Herald.” He is widely considered one of the most noted sports writers of the period.
His style was noted for his eschewing of slang such as “swat, pill, horsehide”, etc. His choice of words were those less chosen, terse, precise, kind. His style was succinct, his knowledge encyclopedic. He always signed his copy, William B. Hanna, and became upset if anyone changed it.
DAVID BANKS SICKELS
David Banks Sickels (1837-1918) was a Civil War Correspondent, Fiscal Agent for the State of Arkansas, a Diplomatic Representative of Siam and Acting Consul of The Netherlands. With Lyman W. Griggs he founded the American Surety Company and upon his retirement, focused on literary work. He authored a prolific amount of poems, many of which were published in “Leaves of the Lotos” and “Flowers from the Wayside”
Posted by Richard Zampella at 11:24 PM No comments:

At the stroke of midnight on December 31, 2020, Idylease will turn 118 years old. Happy New Year from Idylease: A Historic Landmark in the Newfoundland section of West Milford, NJ #happynewyear2021 #health #happiness

Posted by Richard Zampella at 10:51 PM No comments:

INSIDE HIGH NOON, a documentary explores both the remarkable 1952 film and the gripping story behind its troubled production. The real-life events behind the making of HIGH NOON make for rich drama, indeed.When released, HIGH NOON was seen as an attack on HUAC. However, this means little to an audience today. INSIDE HIGH NOON examines with fresh insight what makes HIGH NOON timeless, and why it works so powerfully still, over 65 years after its release. Introduction by President Bill Clinton. #princealbertmonaco #billclinton #highnoon #garycooper #gracekelly

Posted by Richard Zampella at 10:04 PM No comments: