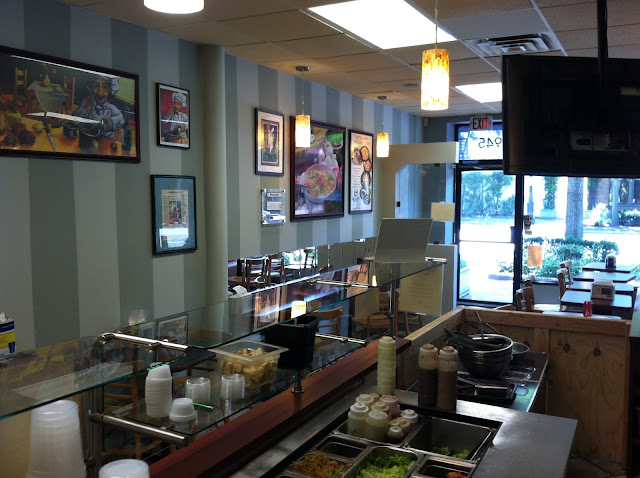 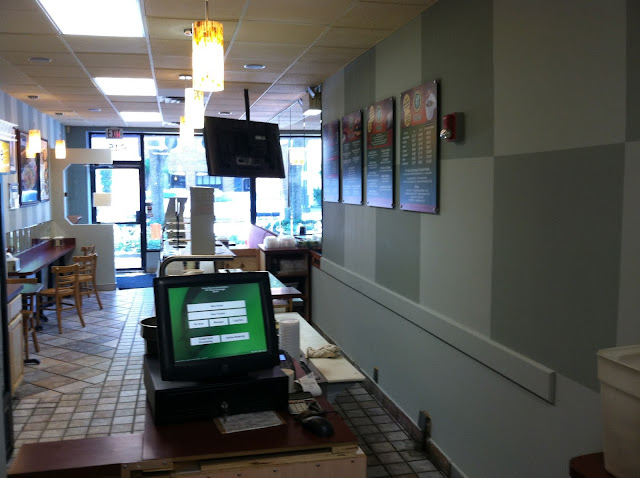 The New York Soup Exchange recently contracted with the restaurant design firm Zampella & Company to complete the re-design of the interior of the flagship store located in Garden City, NY.

About the NY Soup Exchange

Driven by a passion to serve the world's best soup, Ken Kaplan discovered his true calling in 1998 when he opened his Garden City Restaurant, The NY Soup Exchange. Since then, they have been consistently voted the best soup on Long Island by Channel 12, NY Newsday and the Long Island Press Association.

Richard Zampella has worked & consulted to major hotel companies, such as the Plaza & Starwood Hotel Corporation, to esteeemed restaurant groups like Smith & Wollensky, Fireman Restaurant Group and Joe Baum, to legendary restaurants such as the Rainbow Room, Le Cirque and the Oyster Bar at Grand Central, to family venues such as J.A. Heneghans & Skipperdee’s Cream Shop.

Posted by Richard Zampella at 3:35 PM No comments: 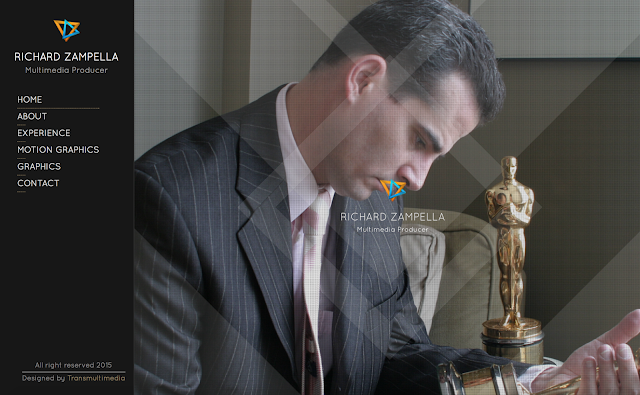 Richard Zampella is Managing Partner of Transmultimedia, Inc. A New York City based creative services company. Over a span of the last decade, he has produced a number of special feature documentaries for Warner Home Video, Lionsgate Entertainment and Paramount Pictures.

Zampella most recent projects include digital remastering of Margaret Meade’s New Guinea Journal that was written, directed and produced by Craig Gilbert who created the PBS series; An American Family.

Zampella is currently in production with Elmore Leonard: the Dickens of Detroit. Central to the project about this celebrated American author, is more than half-an-hour of never-before-seen interview footage with Leonard in which he analyzes and discusses how he started, why he wrote what he did and how he arrived at his lean, terse minimalist style of writing.

Learn more at: www.richardzampella.nyc
Posted by Richard Zampella at 1:45 PM No comments:

'Cooper and Hemingway: The True Gen'' review by pad.operaphile@ 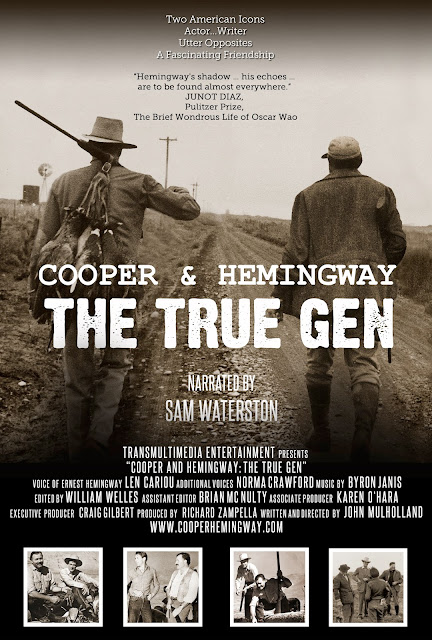 Writer /Director John Mulholland can hold his head high for every aspect of this MASSIVE documentary about 2 of the greatest men of the 20th century, namely Gary Cooper and Ernest Hemingway, the world's biggest actor/movie star and the world's most imitated author. They might have had nothing in common when first they met in at Sun Valley, 1940, but they became the best of buddies and eventual cronies. This step back in time truly reveals a plethora of riches that are absorbed with the greatest of pleasure by the viewer. The intensity of youth with its thrilling fame, that mid life period of some trouble, a return to greatness in older age, these two lives parallel one another on the grandest of scales. One gets to know the men individually and as a dynamic duo, friends who cared for each other as brothers. As the bad times came, it seemed to come for both as Coop and Hemingway both died in 1961 only 7 weeks apart. There is over abundant material available to produce one hell of a great motion picture such as HEMINGWAY and GELLHORN which starred Clive Owen and Nicole Kidman, as his 3rd wife. Neither men were perfect by any stretch of the imagination, but we come to care for them big time, warts and all. Expect anything from this documentary that tries to leave out NOTHING!
10/10

In Memoriam: John MacDonald Jr. | Kindness is an Underrated Virtue

Kindness is an Underrated Virtue

It has been said that kindness is an underrated virtue and that true kindness is often "infused with quiet wisdom, supported by courage, and threaded with balance.” The dictionary defines kindness as "the virtue of showing love" and the qualities of having a sympathetic, affectionate, warmhearted and considerate nature. Any virtue can be considered as the power to accomplish good, often in the face of obstacles and at the cost of sacrifice. Virtues enable us to establish and nurture life-long relationships with others and ourselves.

I will forever remember John D. MacDonald as a virtuous and kind man.

Seldom in life do you meet someone who is as genuine as John D. MacDonald was. A man of conviction, he was a silent and selfless servant to the community of Point Lookout, NY. In his lifetime, he made countless contributions to the the citizenry of his beloved community. He gave generously of his experience and knowledge to those around him and never failed to come to the assistance of those in need. I first spoke in depth with him when the Point Lookout Chamber of Commerce honored him in 2013 when the organization recognized him as Citizen of the Year.

From that time forward, it was not unusual for him to visit my shop on Lido Boulevard. We would sit and he would tell me stories of Point Lookout’s past and his memories of the Snack Shack that he owned on Lido Boulevard prior to enlisting in WWII. He was proud of his service in the Army Air Corp when he was stationed in India at the age of 18. When he returned, he passed the Snack Shack onto his brother and followed his father into the plumbing business.

 It was also not unusual for me to knock on his door with a fresh batch of recently baked cupcakes from my store. I will always remember how his face would light up when he would lay his eyes on those sweet confections. John MacDonald had a sweet tooth.

John MacDonald came to Point Lookout with his family in 1929 from Salem, Massachusetts at the age of nine. At that time, there were approximately 43 families that lived in town year round. The full time resident were all engaged in local commerce. They were the contractors and builder that built this town.

John D. MacDonald Plumbing had it's start with the "building boom" that occurred on Inwood Ave around 1935. Glenn Little, the local builder began building a series of 1 story brick homes that line Inwood Ave today. You could purchase one for $3,000. If you wanted an extra lot to go along with it, that would set you back an additional $500. This building boom, solidified the family business. For $240 per house, John D. MacDonald Plumbing installed the complete plumbing system.

John told me how he cut the rumble seat off the back of the chassis of his Model A Ford & retrofitted it as a improvised pickup truck and that he used to take that Model A out on the ice of Reynolds Channel when it froze over in the winter. He told me stories about Tom Dyer who was the first Postmaster in Point Lookout and how he had been appointed by Teddy Roosevelt as a reward for his loyalty when they both Charged up San Juan Hill together in 1898.

John D. MacDonald, in addition to being a successful entrepreneur and businessmen has been a quiet servant of this community for many years. He was also a two time chief of the Point Lookout Volunteer Fire Company Inc.

John D. MacDonald erected the first public Christmas Tree in town on Lido Boulevard. He got into a lot of trouble he when he shorted out the family fuse box as a result. He would later go on to organize the decoration of holiday lights on Lido Blvd each year with the local electrician.

John D. MacDonald, helped form the first boy scout troop in Point Lookout along with Ludwig Meier. At the time Point Lookout was all sand and no trees. Troop 525, which met at the firehouse planted the trees that adorn town so they could all attend the International Boy Scout Jamboree that was held in Switzerland that year. If you appreciate the shade during the summer around town: Remember John D. MacDonald.

He served for 17 years as the chairman of the Zoning Committee of the Civic Association & served for 20 years on it's Board of Directors. His tenure saw the elimination of two family housing which has maintained the character of the community to this day. He hung the first halyard on the top of the Coast Guard Station Flag Pole. He erected Point Lookout's first ice skating rink.

In the 60's he served as a republican committeeman responsible for numerous legislative changes to protect the community including spearheading the purchase of the Vest Park Property that is adjacent to Aggie's Market.

It is with a heavy heart that I bid my final farewell to John D. MacDonald. I liked very much having him as a friend. I will miss our conversations. He will be sorely missed by those that knew him as he enriched the lives of all that came into contact with him. He earned the most profound trust, respect and gratitude from his fellow citizens. He was a person that made the world a better place to live in for the last 94 years.