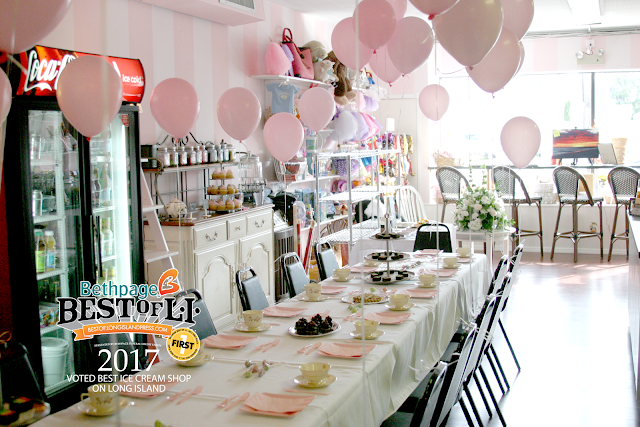 Yup, it’s official. Skipperdee’s has been selected as the Best Ice Cream on Long Island. The store was nominated for this year’s Bethpage Best of Long Island in the “Best Ice Cream” category and was awarded the top honor on February 21, 2017.

Together we brought this title to Point Lookout, the place we call home. The official announcement was made after 780,243 votes were cast and tabulated. The public has spoken to name Skipperdee’s Best Ice Cream in the Food section!

Skipperdee’s is located at 26 Lido Boulevard located in Point Lookout and is a celebration of all things sweet and fun. Drop in for a scoop of ice cream in flavors like sweet and salty pretzel or carrot cake, or warm up with an espresso, cappuccino, or other specialty drink. Or stop by for afternoon tea, where they serve hot cups of tea alongside finger-sandwiches and desserts. Bakers work tirelessly to whip up cupcakes and other baked goods like macarons, while classic candies like Goobers and Chuckles await to delight kids young and old.

Richard Zampella worked in the hospitality industry for over 30 years. He has managed the Oak Room at the Plaza Hotel and served as Food & Beverage Manager of the The Essex House Hotel on Central Park South. For 15 years he worked 65 floors high atop Rockefeller Center at the Rainbow Room under legendary restauranteur Joe Baum. In 2010, he created the concept and design for Skipperdee’s Ice Cream Shop in the seaside hamlet of Point Lookout, NY.
Posted by Richard Zampella at 11:32 AM No comments:

Richard Zampella is a documentary film producer who along with Writer/Director John Mulholland has created content for Warner Home Video and Paramount Pictures. Among their production credits are Sergeant York: Of God and Country, narrated by Liam Neeson. Inside High Noon narrated by Frank Langella and Cooper & Hemingway: The True Gen narrated by Sam Waterston. The later was chosen by the New York Times as a Critics’ Pic in October of 2013.

In early 2017 both Mulholland and Zampella have begin post production on a brand new documentary which explores the life and works of Author Elmore Leonard and his place in the American literary pantheon. The documentary discusses how he started, why he wrote what he did, how he arrived at his lean, terse minimalist style of writing.

Documentary Writer/Director, John Mulholland has wrapped production on his new feature documentary on "Hollywood's Favorite Writer" Elmore Leonard, and has begun post-production on the film.

The documentary is produced by Richard Zampella , who shot the interviews and will be editing the film with Mulholland. Central to the film, adding depth and resonance, is more than half-an-hour of never-before-seen interview footage with Leonard in which he analyzes and discusses how he started, why he wrote what he did, how he arrived at his lean, terse minimalist trademark.

Elmore Leonard is an American novelist, short story writer, and screenwriter. Among his best-known works are Get Shorty, Out of Sight, Swag, Hombre, Mr. Majestyk, and Rum Punch (adapted for the movie Jackie Brown). Leonard's writings include short stories and original screenplays that became the films 3:10 to Yuma and The Tall T, as well as the FX television series Justified.

On camera interviews include: