Season's Greeting from Idylease: A Historic Landmark located in Newfoundland, NJ -- Wishing you all the best this holiday season and throughout the coming year. Celebrating our 115th Christmas Season #historic #landmark #idylease #christmas #greetings #video #christmascard

http://www.idylease.org
Posted by Richard Zampella at 4:29 PM No comments:

When Kirk Douglas, several years ago, happened to hear that we were putting together a documentary on the friendship between Ernest Hemingway and Gary Cooper, he got in touch and told us about a letter he had written to Gary Cooper.

Gracious and modest gentleman that he is, Mr. Douglas enquired if we had any interest in the letter. When we responded immediately in the affirmative, he then offered to read the letter on camera for the documentary.

What appears in The True Gen is an edited version. Here, in our tribute to Mr. Kirk Douglas on his 102nd birthday, is Mr. Douglas reading the letter in full, unedited.

From all of us at Transmultimedia, Happy Birthday, Kirk Douglas.

Cooper & Hemingway: The True Gen is Available on DVD and in a Collector's Edition Blu-Ray DVD Box Set! http://www.chiptaylor.com/cooper_hemi...

Cooper & Hemingway: The True Gen is written/directed by John Mulholland. Narrated by Sam Waterston with Len Cariou as the voice of Ernest Hemingway. Produced by Richard Zampella

Learn more at http://cooperhemingway.com
Posted by Richard Zampella at 12:35 AM No comments:

The Food Mill in Point Lookout Opens its Doors

The market that Nicholas and Carmela Merola opened in 1930 in the tiny Long Island hamlet of Point Lookout, NY recently re-opened its doors at 40 Lido Boulevard. The New Market is named the Food Mill and will continue to operate from the same location on Lido Boulevard, is something of a throwback, like Point Lookout itself.

The village, surrounded on three sides by water, is a seaside Wobegon within commuting distance of New York City. The speed limit is 15 mph. You have to pick up your own mail at the post office. And celebrity residents have been more on the order of Charles Atlas or Marlene Dietrich than Madonna or Lady Gaga.

Proprietors Richard Zampella and Shannon Mulholland know what it takes to run a business in Point Lookout. Their Ice Cream Store, Skipperdees has been voted as the Best Ice Cream Shop on Long Island for 2017 & 2018 and has been serving up sweets to the young and young at heart since 2007.
Posted by Richard Zampella at 8:16 PM No comments: 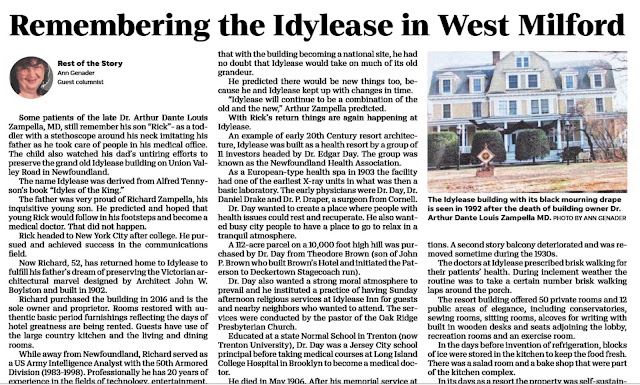 Thanks to Ann Genader for her April 19, 2018 article on Idylease. Ann was a tireless supporter of my father, Dr Arthur Zampella. She served as public relations director at Idylease when it was a nursing home for the elderly from 1954-1972.


Read Article at: https://www.northjersey.com/story/news/passaic/west-milford/2018/04/19/west-milford-nj-jefferson-nj-remembering-idylease-arthur-dante-louis-zampella/529633002/
Posted by Richard Zampella at 12:30 AM No comments: 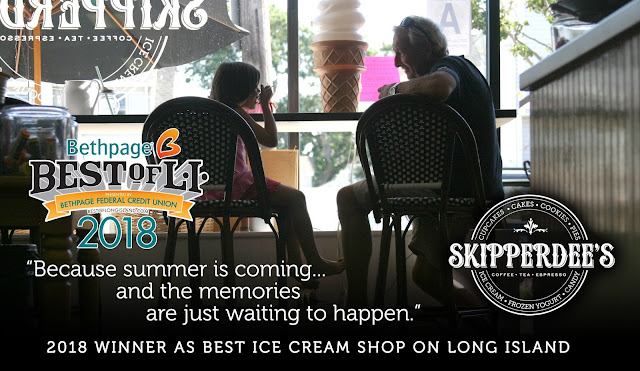 Skipperdees is the Best Ice Cream Shop on Long Island – for the 2nd consecutive year! Our sincere thanks to our Long Island Guests of Skipperdee’s

Each year, Long Islanders are invited to nominate and vote for the best local businesses in a range of service categories as part of an annual Best of Long Island Business program. This year 909,094 votes were cast and thanks to our neighbors, Skipperdee’s has been voted as the Best of LI Business in the food services business for Ice Cream - for the 2nd consecutive year! You also nominated us in 2018 as the Best Lunch Deal, Bakery, Dessert Place and Candy Store.

Skipperdee’s Ice Cream Parlor may feel like an old-school soda fountain, but the local ice cream shop actually started 8 years ago as a social center to fulfill the needs of the seaside community of Point Lookout, NY.

And that homey, nostalgic feel is exactly what founder Richard Zampella and Shannon Mulholland were after when they created the concept and decor for the thriving business. Despite the pursuit of selecting the finest ice cream flavors and ingredients available, the core of the shop has stayed the same — “Providing the best ice cream on Long Island in a family friendly environment,” Zampella said.

Skipperdee’s is located at 26 Lido Boulevard in Point Lookout, NY. Visit them on the web at http://www. skipperdees.com
Posted by Richard Zampella at 11:57 AM No comments:

Original DVD Trailer for Inside High Noon, produced by Transmultimedia Entertainment for the Paramount DVD release of the 2-Disc Special Collectors Edition of the 1952 Motion Picture, High Noon.

Gary Cooper won the Oscar for Best Actor in this classic tale of a lawman who stands alone to defend a town of cowardly citizens against a gang of revenge-seeking criminals. In the greatest showdown in the history of cinema, Cooper stands to lose not only the town but his new wife. The film also stars one of Hollywood’s most beloved and prolific actors, Lloyd Bridges, and marks the first starring role for screen legend, Grace Kelly.

The real-life story behind the making of HIGH NOON is dramatic, suspenseful, gripping. Like the film itself, it is a story of fear, of heroism, and the very real danger of political abuse. What happens up on the screen is in many ways a metaphor for the extraordinary events behind the camera.

But Inside High Noon also explores the film itself:

January 9, 1992  was a rainy and cold day. I was living in a railroad flat in Jersey City, NJ. I was living a few blocks from the place that my father had been born in 1917.  It had been many years since my father had a series of heart attacks, and  coronary by-pass surgery. Most of his brothers had all died and I remember him being saddened that most of his friends were also gone.

Growing up, I knew he was not always in the best health, but on that fateful day, I still lament January 9th as his final goodbye. I was twenty four when he died. I am fifty-one now. I carry his memory with me each and every day. His wedding ring on my finger as a daily companion. Once while playing softball in Central Park I thought I had lost his ring. I sat in the grass devastated that I had lost yet another link to him. The ring was recovered. I have his watch and some other personal possessions of his. He was a man of humility with few items collected throughout a lifetime.

I am most grateful that each and every day I can walk the very grounds at Idylease that he did. If it snows, I can remember him pulling me on a sled with his rubber galoshes. Everywhere I look, I can remember a story or a spot of him being there.  I am grateful that he equipped me to carry on. I belong here. I have so many people amongst the living that have made this possible. They know who they are and I am eternally indebted to them.

I often feel his presence with me at milestones in my life since he is gone. I know he would be saddened by my setbacks and elated by my successes.

When I was twenty-four, I thought my father’s death would teach me about dying. At fifty-one, I think it has taught me mostly about living; that life is short but meaningful; that even though time is measured, there is some time, if you pay attention; and that everything that matters in life is in the here and now.

I miss you Dad.

Idylease first opened her doors to the public on New Year’s Day in 1903. We are celebrating 115 years as West Milford’s most noted Historic Landmark. Here’s wishing you all the joy of the season. Have a Happy New Year!
Posted by Richard Zampella at 1:20 PM No comments: