Richard Zampella spent an idyllic childhood growing up on the grounds of Idylease under the watchful eye of his father Dr Arthur Zampella who owned and operated Idylease Nursing Home from 1954 until until 1972.

Both father and son shared a bond with the history of the landmark structure and would both maintain a detailed collection of ephemera and memorabilia related the property. This website was created from that collection in the summer of 2016 shortly after the purchase of Idylease by Richard Zampella in April of 2016.

The Newfoundland section of West Milford has an incredibly detailed history, from the earliest iron and ice cutting industries to farming and and the thriving tourism industry of the early 1900’s. Of all the hotels that once graced the region, only one -- a former resort hotel known as Idylease, remains standing as proof of that once thriving tourism industry. Idylease remains one of Newfoundland’s most beautiful and impressive structures.

Posted by Richard Zampella at 6:00 PM No comments:

Joseph French Johnson: Author of The Price of Success 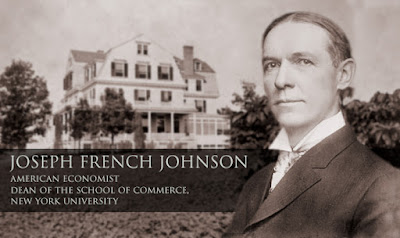 Joseph French Johnson (August 24, 1853 – January 22, 1925) was an American economist, journalist, Professor, and Dean of the School of Commerce, Accounts and Finance, New York University, and founding Dean of the Alexander Hamilton Institute in New York in 1909. He authored the timeless essay: the 'Price of Success' in 1900 (text below). On January 22, 1925 - he passed into immortality at Idylease in Newfoundland, N.J.

THE PRICE OF SUCCESS

“I often wonder what it is that brings one man success in life, and what it is that brings mediocrity or failure to his brother. The difference can’t be in mental capacity; there is not the difference in our mentalities indicated by the difference in performance. In short, I have reached the conclusion that some men succeed because they cheerfully pay the price of success, and others, though they may claim ambition and a desire to succeed, are unwilling to pay that price.

And the price is…

To use all your courage to force yourself to concentrate on the problem in hand, to think of it deeply and constantly, to study it from all angles, and to plan.

To have a high and sustained determination to put over what you plan to accomplish, not if circumstances be favorable to its accomplishment, but in spite of all adverse circumstances which may arise and nothing worthwhile has ever been accomplished without some obstacles having been overcome.

To refuse to believe that there are any circumstances sufficiently strong to defeat you in the accomplishment of your purpose.

Hard? I should say so. That’s why so many men never attempt to acquire success, answer the siren call of the rut and remain on the beaten paths that are for beaten men. Nothing worthwhile has ever been achieved without constant endeavor, some pain and constant application of the lash of ambition. That’s the price of success as I see it. And I believe every man should ask himself: Am I willing to endure the pain of this struggle for the comforts and the rewards and the glory that go with achievement? Or shall I accept the uneasy and inadequate contentment that comes with mediocrity? Am I willing to pay the Price of Success?”