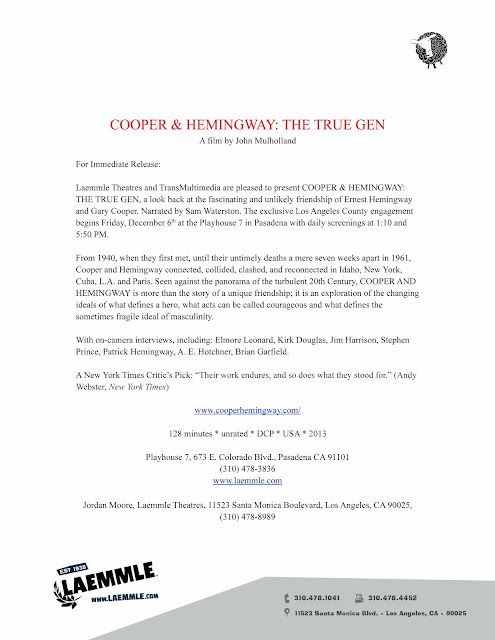 FOR IMMEDIATE RELEASE -- LOS ANGELES, CA December 3, 2013 -- Laemmle Theatres and TransMultimedia are pleased to present COOPER & HEMINGWAY: THE TRUE GEN, a look back at the fascinating and unlikely friendship of Ernest Hemingway and Gary Cooper. Narrated by Sam Waterston. The exclusive Los Angeles County engagement begins Friday, December 6th at the Playhouse 7 in Pasadena with daily screenings at 1:10 and 5:50 PM.

From 1940, when they first met, until their untimely deaths a mere seven weeks apart in 1961, Cooper and Hemingway connected, collided, clashed, and reconnected in Idaho, New York, Cuba, L.A. and Paris. Seen against the panorama of the turbulent 20th Century, COOPER AND HEMINGWAY is more than the story of a unique friendship; it is an exploration of the changing ideals of what defines a hero, what acts can be called courageous and what defines the sometimes fragile ideal of masculinity.
With on-camera interviews, including: Elmore Leonard, Kirk Douglas, Jim Harrison, Stephen Prince, Patrick Hemingway, A. E. Hotchner, Brian Garfield.