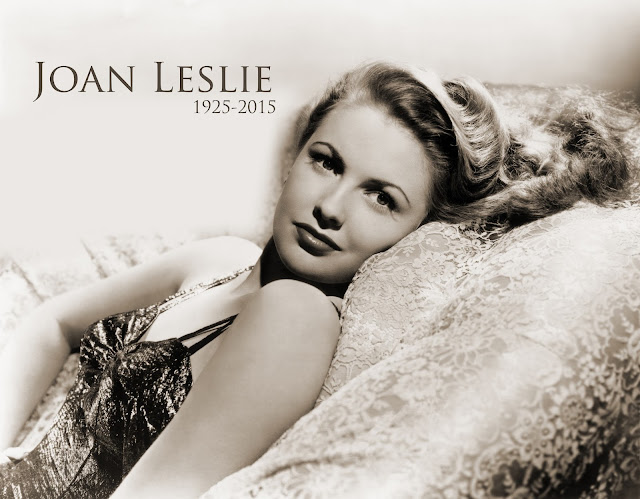 “We will miss our friend Joan Leslie" one of our guests on Hollywood Film Chatter and an on camera participant on our documentary Sergeant York: Of God and Country.  A wonderfully elegant & sophisticated lady."

How’s this for hitting the ground running? In 1941, at 16, Joan Leslie starred opposite Gary Cooper (Sergeant York) and Humphrey Bogart (High Sierra). At 17, opposite James Cagney (Yankee Doodle Dandy) and Henry Fonda (The Male Animal). And at 18? How about Fred Astaire (The Sky’s The Limit)? And two of Leslie’s co-stars, Cooper and Cagney, won Best Actor Oscars playing opposite her.

Born Joan Agnes Theresa Sadie Brodel in Detroit, Michigan, Leslie began performing at the age of three as part of a vaudeville act with her two sisters. She began her Hollywood acting career while still a teenager, performing under her real name in several movies, beginning with her debut in the MGM movie (Camille) in 1936 with Greta Garbo and Robert Taylor.

In Warners' Hollywood Canteen (1944) Leslie played herself, as did her real-life sister Betty Brodel. When her Warners contract ended in 1947, Leslie free-lanced for several years, turning in an admirable performances in The Woman They Almost Lynched (1956).

A battle with Warner Bros. over her long-term contract ended her tenure there and made it hard for her to find work at the other major studios. She got one good part in the independently produced Repeat Performance (1947), and then ended up at Republic Pictures, where prestige was scarce but some great roles came her way.

Leslie was not afraid to challenge her screen image as the sweet and supportive woman. Looking for richer roles, Leslie went the independent route in the late forties. In 1948’s Northwest Stampede, she plays the foreman of a ranch, every bit as tough as the men. In 1950, she worked with director Nicholas Ray in the underrated film noir, Born To Be Bad.

She starred in many more movies until 1950, when she married Dr. William Caldwell. Her last movie role was in The Revolt of Mamie Stover (1956), and she eventually retired from acting altogether to look after her identical twin daughters Patrice and Ellen. She has appeared in several television commercials since then, and also made guest appearances in the TV shows Murder, She Wrote and Charlie's Angels. She also provided commentary as extras on the Yankee Doodle Dandy, Sergeant York, and High Sierra DVDs.

In recent years, she had a small part in a TV movie remake of Repeat Performance called Turn Back the Clock (1989).

She has a star on the Hollywood Walk of Fame at 1560 Vine Street.